The seeding for the first Major of the season has been announced.

Stage one of the 2021 Call of Duty league season is coming to a close. But before we move on to stage two, we have the Major to get through. The Major sees all 12 teams compete for a prize pool of $500K. The group pool matches have decided the seeds, so here’s the matchups and our predicted winner.

Friday will then feature four more matches, with three on Saturday before the Winners Finals, Losers Finals and Best of 9 Grand Finals are played on Sunday.

This Major will be the hardest to predict of the year. With each team only playing five matches so far, it’s hard to determine where everyone ranks up against each other. However, we’re looking at Atlanta FaZe to take the victory. Currently undefeated, FaZe have looked great and although they were taken to a game five by Paris Legion, they used that series to broaden their map pool.

FaZe undoubtedly look like the best team in the league right now, and we expect them to win the first Major of the season, and take home the $200K first place prize. However, there’s not just cash on the line. The Major also gives a large amount of CDL points, which are essential for teams looking to make that top 8 for Champs at the end of the season.

Sadboys bids goodbye to ppd after weak run. One of the most storied players in

Alexx will be replaced by Zed for the upcoming Stage 1 Major. The London Royal Here are the teams whose stock went up, or down, following the CDL Super Week. 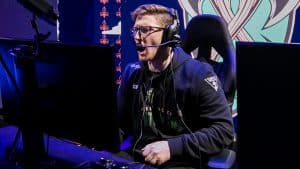 The King joins Oakley as their first esports Athlete. Scump is undoubtedly the most popular Dota 2: T1 Drops JaCkky From Its Roster After Win

Many fans expressed disappointment after T1 decided to release JaCkky from its roster. In a