Popular Twitch streamer KhaleesiBB has accused Overwatch League player Walid “Mouffin” Bassal of sexual harassment. Along with other allegations, the Boston Uprising tank member tried to defend himself but to no avail. Boston Uprising doesn’t support Mouffin’s alleged actions and is further investigating the situation.

On March 26, Twitter user and game developer @itsFODDER posted an ominous tweet that may have blown the whistle on the entire situation. He said there was an Overwatch League player preying on minors, and accused the player’s team of knowing about it.

Apparently there is another adult player in OWL preying on kids. Their team apparently knows about it. I’ll let the person who said they were planning on leaking this say it first. If they don’t say it within the next 24 hours and decide to go back on it, I’ll publicize it.

A day later, Khaleesi posted a TwitLonger describing her experience with Mouffin. This supported FODDER’s allegation, and so the drama unfolded.

The situation she described took place last Summer, and she gave a timeline of the events that happened. According to Khaleesi, she and Mouffin began dating exclusively until she confronted him about some issues. It seems he had contacted several girls, one of them being underage, asking for explicit photos. Afterward, they both decided to stay friends.

Unfortunately, Mouffin wasn’t very receptive to that as he supposedly tried to win her back at TwitchCon. Khaleesi then described his unacceptable behavior throughout the trip. She states he was “being aggressive with other girls at the Airbnb, being creepy, touching them and grabbing their wrists so hard he left bruises on them.”

These are dms from a girl who was 17 at the time when Mouffin was sexually explicit to her, she wishes to remain anonymous, as do many of the girls. This person doesn’t want attention, but she does want to be heard, and help others. Please help us stop this from happening again: 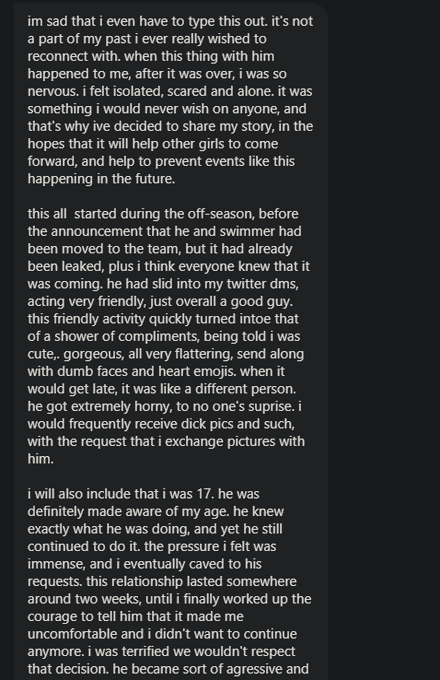 Fast forward to the end of this past January, they had made up and tried to mend their friendship. It was then that Khaleesi found out about his inappropriate texts and DMs to underage girls. She summed up the situation saying, “Mouffin had a penchant for underage girls and overall extremely predatory behavior towards women.”

Additionally, she said most of these girls would not come forth as he blackmailed them into deleting evidence. After her Twitter post, someone contacted her anonymously stating they also had similar experiences with Mouffin. This person was 17 at the time, similar to the girl she had mentioned on her TwitLonger post.

Khaleesi released this info to make sure other women are aware of this kind of behavior in the esports scene.

“There is plenty of popular Overwatch community members doing very similar things,” she said. “Mouffin isn’t even close to being the only predator in the scene, but there [are] so many victims scared for either their safety or reputation that very rarely do these things get brought into the light.”

these are screenshots from a conversation i had with mouffin in late february. here he admits to knowing that this girl was 17, yet he still sent her dick pics before she turned 18. (the girl’s name has been censored in the first photo) (1/2)

Soon after, word of the situation got out, causing Boston Uprising to respond to the allegations. They suspended him from competing in their match against Toronto Defiant. For the time being, they will not comment on the issue until after a thorough investigation. Khaleesi didn’t understand why there needed to be an investigation, as she mentioned they were aware of the issue a while back. 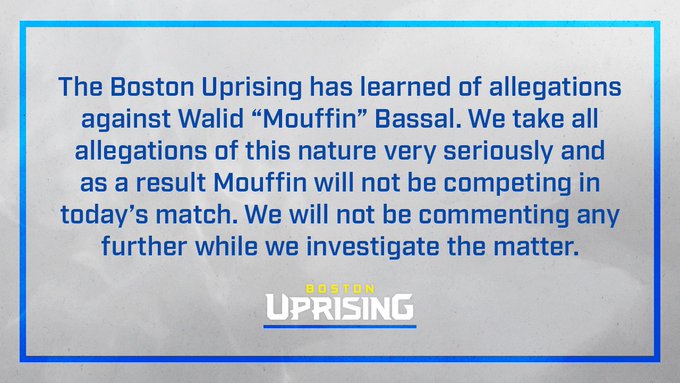 The organization has yet to provide any further updates. Stick with Daily Esports as details continue to develop.